On November 10th, Doosan Fuel Cell officially announced that it had signed a Memorandum of Understanding for the joint development of a fuel cell system for marine propulsion and power generation on November 9thwith Navig8, a Singapore-based global shipper which possesses approximately 140 chemical and oil carriers and tankers.

Doosan Fuel Cell is planning to apply Solid Oxide Fuel Cells, being developed by them, to a 50,000 ton petrochemical carrier set to be ordered by Nvig8. This system will be tested to ensure fuel cells power and propel the ship. Navig8 as well as Korean Register will help review the ship design and provide other technical supports.

Fuel cells garner attention as a clean energy source to allow ships to comply with greenhouse gas emission caps. International Maritime Organization(IMO) introduced its toughed emission cap to cut the emissions in half by 2050 from 2008. This measure has provoked maritime players into actively finding ways to adapt to the change by using a desulfurization scrubber and developing clean energy sources, such as ammonia and hydrogen.

According to Clarkson Research Service, an analysis agency for shipbuilding and shipping in the UK, annual new orders for ships average approximately 30 million CGT(Compensated Gross Tonnage). If non-compliant vessels adopt fuel cell engines, new orders would reach up to 300GW by 2050.

Marine fuel cells are thought to be more efficient than conventional fossil fuels in power generation. Given the fact that fuel cells’ modularity allows them to be installed anywhere in the ship, this advancement will become a game changer in conventional maritime design.

"Given the market structure where ship engines are directly ordered by ship owners to shipyards, this cooperation with the shipowner will ensure stable development, and this partnership could move up the time when products are rolled out since fleet can be tested at a the owner’s ship where the fuel cells are set to be installed," said Sookyung Yoo, CEO of Doosan Fuel Cell. “The fuel cell is a great boon to the marine industry which is struggling to comply with environmental regulations. Doosan Fuel Cell will remain committed to developing new hydrogen applications along with entering the green maritime market.”

Last month, the company unveiled its plan to develop ’more efficient SOFCs' in the Korean market. The goal is to localize cells and stacks, which are key to SOFCs, and to mass-produce SOFC systems in Korea from 2024. This SOFC R&D is part of the project of the Ministry of Trade, Industry and Energy. The solid oxide fuel cell is one of fuel cell systems. It has higher power efficiency than other fuel cells. That’s why this type is more favored than any other types in a condition where only electricity is needed. Doosan’s SOFC will be designed to operate at 620℃, approximately 200℃ lower than the typical operating temperatures, with higher efficiency and longer life. 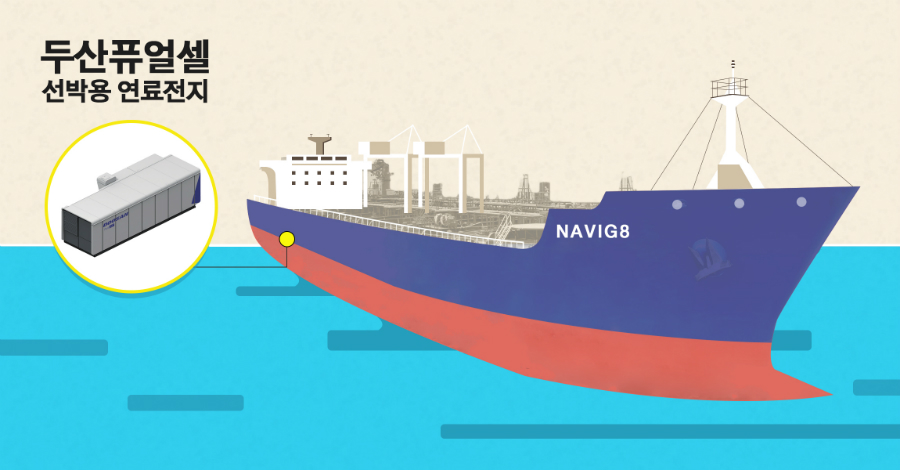 Working with Navig8, a global shipper, Doosan Fuel Cell will build green maritime fuel cells. The company is set to install solid oxide fuel cells, which are being developed, in a 50,000 tone chemical tanker, Navig8 will order, and to demonstrate its applicability to the ship for marine propulsion and power generation.