Doosan Fuel Cell signed a Memorandum of Understanding(MOU) with Korea Offshore & Shipbuilding, a shipbuilding holding company of Hyundai Heavy Industries Group, for the joint development of green SOFCs for ships.

Both companies agreed to develop a MW class Solid Oxide Fuel Cell systems and to carry out joint research and development in the shipbuilding and offshore fields.
Doosan Fuel Cell will design and manufacture maritime SOFC systems as well as conduct safety testing and develop system control logic while KSOE is in charge of fuel cell arrangement and development of ship-linked system control technology, taking maritime nature into consideration.

Marine fuel cells are key to ushering into the green maritime era as they are highly efficient fueled by Hydrogen and LNG to generate electricity with an approximate 40% higher generating efficiency than other conventional marine engines as well as less Sox, NOx, other pollutants, and greenhouse gasses emitted.
Amidst IMO’s announcement to reduce total annual GHG emissions from international shipping by at least 50% by 2050 compared to 2008, the two companies showed their commitment to developing maritime fuel cells swiftly with the aim of strengthening competitiveness in the shipbuilding industry.

Doosan Fuel Cell unveiled its plan to develop highly efficient SOFCs in October and has been involved in a project funded by the Ministry of Trade and Industry with an aim of manufacturing its SOFC systems in Korea in 2024. 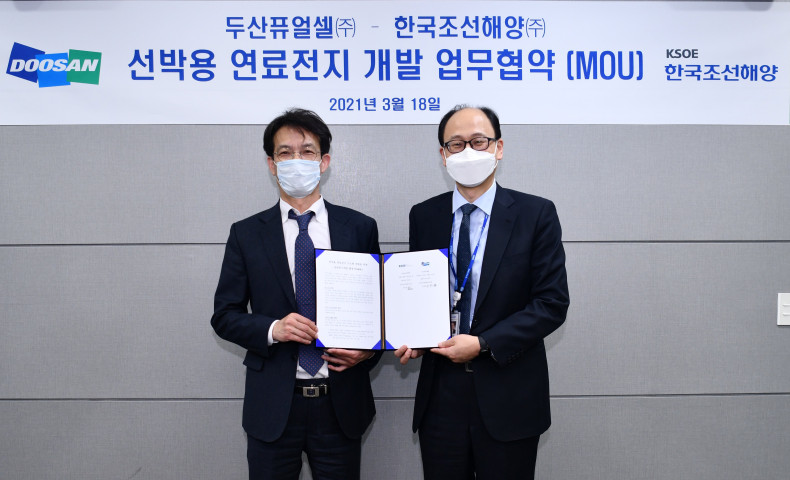