Doosan Fuel Cell rolls up its sleeves on building state of the art technologies to convert to clean hydrogen fuel cell.

Doosan Fuel Cell announced that it signed an MoU for ‘Clean hydrogen fuel cell development and conversion’ with KOSPO, Samsung C&T, and Korea Institute of Energy Research at Doosan Tower in Dongdaemun on June 3rd. 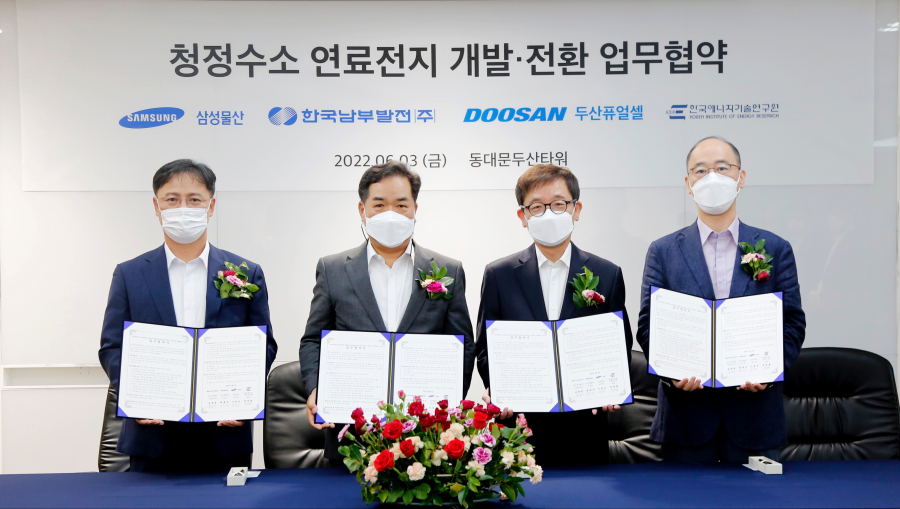 Hydrogen is largely divided into gray, blue, and green hydrogen depending on how they are produced. Gray hydrogen accounts for about 96% of currently produced hydrogen, and is mostly generated by reforming natural gas. Byproduct hydrogen, which comes out from refinery process in petrochemical companies, is also gray hydrogen. Applying CCU technology makes it as blue hydrogen. Since the production cost of green hydrogen produced by electrolysis of water with electricity from renewables such as solar energy is still high, blue hydrogen that emits almost no CO2 and can be generated at a reasonable cost is attracting much attention.

In the meantime, Doosan Fuel Cell decided to participate in the ammonia fuel cell demonstration project. Ammonia can be liquefied at -34 degrees Celsius, and thanks to smaller volume compared to hydrogen, 1.5 times hydrogen can be transported. Furthermore, ammonia’s high energy density adds better efficiency and economics than liquid hydrogen (its liquidation temperature: -253 degrees Celsius).