- In the first half of next year, this cooperation will be expanded from demonstrating hydrogen charging facilities to commercialization.

On November 22nd, Doosan Fuel Cell announced that it had signed a business agreement with SK Energy, a subsidiary of SK Innovation, on 21st of November, to demonstrate high-purity hydrogen production from hydrogen-rechargeable fuel cells and refinery facilities.

This agreement went one step further from the MOU signed by Doosan Fuel Cell and SK Energy in August of last year for “joint technology development and commercialization on hydrogen-rechargeable fuel cells.” 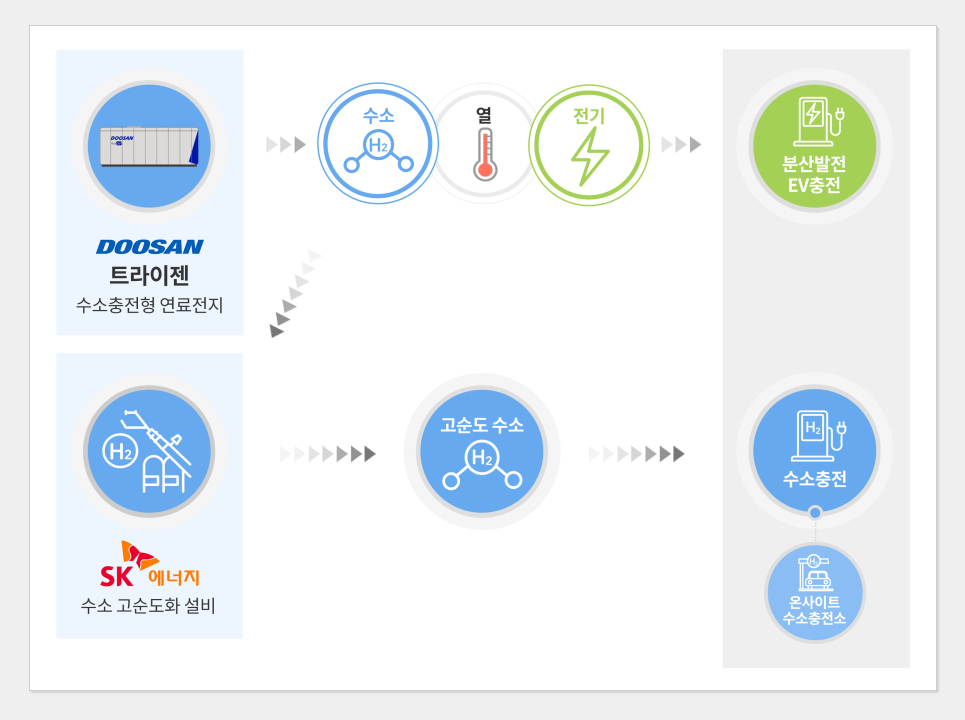 In addition, the two companies will cooperate step by step to expand hydrogen charging stations by 2026.

Trigen, developed by Doosan Fuel Cell, is a product that utilizes a 440kW phosphoric acid fuel cell (PAFC). It has several advantages, such as ▲ price-competitive hydrogen supply for on-site hydrogen charging, ▲ flexible response to demand for mobility hydrogen and ▲easy EV charging.

The hydrogen high-purification facility developed by SK Energy can convert low-purity hydrogen into 99.99% high-purity hydrogen. Furthermore, it is suitable for small-scale on-site thanks to its compact size, cheaper operating cost, operation efficiency through automatic control, and high hydrogen recovery rate. In order to charge hydrogen produced by Trigen into a hydrogen car, technology is required to increase the purity of hydrogen to 99.99%.

“Hydrogen rechargeable fuel cells can be used not only for smooth hydrogen supply but also as a distributed power source, so we can achieve operational efficiency and profitability,” says Seungjoon Lee, head of sales division at Doosan Fuel Cell. “We will come up with various ideas to promote Trigen based on this project.”

"SK Energy is accelerating our platform conversion to strengthen our eco-friendly energy solution and eco-friendly mobility service business at points of contact with customers such as Netruck House, gas stations and charging stations," says Dongsoo Kang, head of SK Energy's S&P (Solution & Platform) Promotion Team. “Through joint development of high-purity hydrogen technology and Trigen, we aim to reduce power transmission and distribution losses and hydrogen distribution costs, supplying eco-friendly energy optimally to customers, and contributing to the revitalization of the hydrogen economy.”