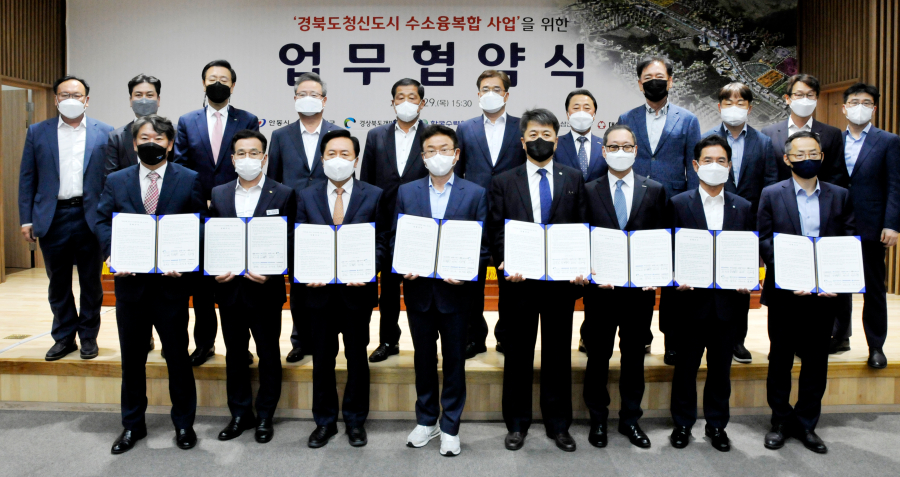 After the MoU ceremony on the 28th, Doosan Fuel Cell CEO Jung Hyungrak, (6th from the left in the front row) is taking a photo with attendees.

Under the agreement, eco-friendly hydrogen convergence infrastructure including a hydrogen fuel cell power plant will be built on a 6,642㎡-size site in Yecheon County. Electricity produced in the hydrogen fuel cell power plant will be utilized as a distributed power source, and heat will be supplied to about 4,000 apartment houses, smart farms and data centers planned to be built nearby for heating, cooling and hot water purpose. In addition, solar panels will be installed on parking lots and rooftops of the plant.

“Doosan Fuel Cell has been developing hydrogen convergence business models to diversify our business landscape,” says the CEO of Doosan Fuel Cell. “We will continue to show our commitment to expanding hydrogen infrastructure through collaboration with local governments and power generation companies.”

Doosan Fuel Cell will complete ramp up of its hydrogen fuel cell factory in Iksan, North Jeolla Province in October this year to alleviate its annual maximum production capacity up to 275MW, while completing Tri-Gen demonstration which was designed to produce electricity, heat and hydrogen at the Hwaseong Gas Corporation site in Gyeonggi Province.